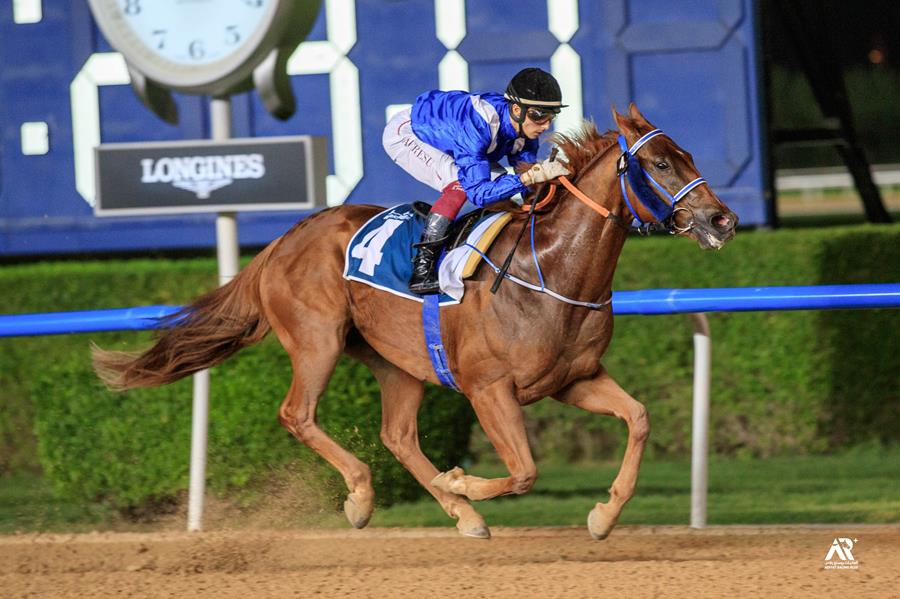 Raaeb is a horse to watch at the Dubai World Cup Carnival after announcing himself as a sprinter to follow in the Nahkeel Handicap, the feature race at Meydan’s second meeting of the season.

Making his first start on dirt and just his fifth in the UAE, he easy passed early leader Meshakel and held off Island Rule for a convincing win in the 1400metre contest. It was a birthday success for trainer Musabbeh Al Mheiri, who has taken over the gelding from Saeed Bin Suroor, and it gives him and owners Shadwell plenty to get excited about. The son of Raven’s Pass was ridden by Antonio Fresu, who feels there could be more to come from the five-year-old, who won this off a mark of 98.

“I didn’t expect this performance tonight as he’s a new horse in the stable and we’re still getting to know him,” said the jockey. “It was his first run on dirt and they usually improve for that.”

The Carnival is also on the agenda for AF Alajaj, who landed the first Group race of the season for Purebred Arabians, the Group 2 Bani Yas, sponsored by Dubai Islands. It was a case of class rising to the top as AF Alajaj, conceding 3kg for his win in the Group 2 Mazrat Al Ruwayyah, battled to a length success.

The Ernst Oertel-trained five-year-old was ridden by Tadhg O’Shea who kept him just behind the pace duel up front, leaving enough in reserve to see off the tenacious Nadelshiba.

“He’s a very good horse and we hope he will develop into a proper Group 1 horse,” said Oertel, for whom it was a fourth winner of the campaign. “We also have [2021 Dubai Kahayla Classic second] AF Alwajel back so two good horses for this season, hopefully.”

O’Shea later completed a double when Ranaan ran out the convincing winner of the 1200metre The View At The Palm Handicap. Trained by Bhupat Seemar for RRR Racing, the five-year-old collected his second course and distance win, closing off a fast pace and stretching clear of the chasing Street Mood by four lengths.

“He’s a horse who loves it when they go fast like that,” said O’Shea. “I knew if I was three or four lengths off them turning in then I’d be able to pick them up. He’s not the biggest and he had a big weight on his first run of the season, so I’m sure there’s improvement in him.”

Doug Watson is no stranger to Classic success with fillies and he may have a contender for 2023 after Awasef took The Pointe Maiden over 1200metres. For a while it looked as if Here We Are and Royston Ffrench had slipped the field but Pat Dobbs had other ideas and set Awasef off in pursuit, eventually reeling in the long-time leader by two lengths.

A $100,000 purchase by Oracle Bloodstock at the Ocala Spring sale, Awasef is a daughter of Cairo Prince. She seemed to impress Dobbs, too, despite wearing a visor for this debut.

“She was very professional out of the gates,” said the Group 1-winning rider. “She’s better with something to lead her at home as when she does get to the front she idles a bit. So it worked out perfectly when Royston went quick and then when I asked her in the straight she quickened up well. There’s a flash on the line and she just had a look at that in the last 50 yards.”

Watson completed a double, when Qareeb made a quick return to action and secured his first local win in the The Club Handicap over 1900metres. Fourth last week when tiring close home, Naser Askar’s colt came from off the pace under Sam Hitchcott, collaring pacesetting stablemate Taking Names and Twelfthofneverland close home.

“The owner asked me to do it; I normally wouldn’t,” said Watson of the quick turnaround. “But he’s a big strong Speightstown and he did a really nice canter on Tuesday. This was perfect for him, a small field, they went a good pace early on and he’s a big horse so, fitness wise, last week helped him too.”

The impressive performance of the night award goes to Long Kiss, who survived a stumble at the start and being adrift early on. Under a cool ride by Jose Da Silva, the Antonio Cintra-trained three-year-old circled the whole field in the straight and won by a length on the line from Golden Arch.

“He stumbled at the start but recovered well,” said the jockey, who was riding his second Meydan winner from as many attempts.

As a Southern Hemisphere-bred three-year-old, Long Kiss can compete in next year’s UAE Classics, which now look a viable aim for the son of Adriano.

Jockey Adrie De Vries remains a popular stalwart of racing in the UAE and he collected his first win of the season in the concluding Palm Beach Towers Handicap, over 1600metres. Riding Falsehood, another new recruit to the Al Mheiri team, the jockey produced his mount to deny longtime leader Tahdeed by half a length.

Racing at Meydan takes a break next week, resuming on Friday, November 25th.