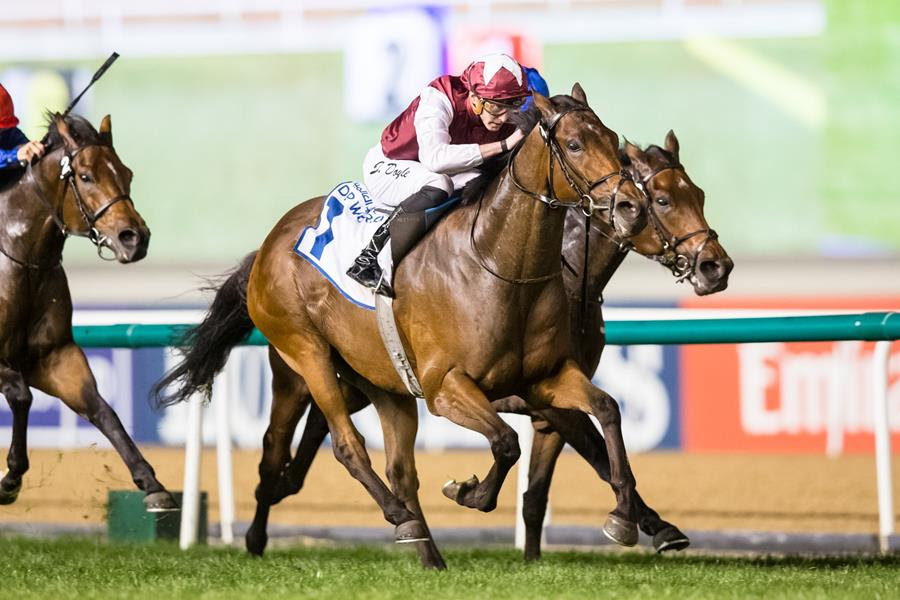 DUBAI (January 23, 2020)—The fourth meeting of the 2020 Dubai World Cup Carnival at Meydan Racecourse on Thursday evening was highlighted by the Group 2 $250,000 Al Fahidi Fort sponsored by DP World—UAE Region. The 1400m turf feature was dominated by trainer Charlie Appleby, who swept the top three with his trio of performers, providing a first winner in the UAE for owner HH Sheikha Al Jalila Racing with Glorious Journey.

Partnered by James Doyle, completing a double and sporting the famous maroon and white silks formerly carried by HH Sheikh Mohammed bin Rashid Al Maktoum’s runners, Glorious Journey was settled in fourth before closing on his stable companions Mubtasim and Mythical Magic, ridden by Brett Doyle and William Buick respectively, quickening to the front 200m out and always appearing to have their measure. Buick’s mount gave chase, but had to settle for second for the second consecutive year in the race. A $3.4 million yearling, the 5-year-old Dubawi gelding has now won five times, including Newbury’s 1400m Group 2 Hungerford Stakes, a success for which he was penalised here.

“It was a nice race,” Doyle said. “He’s a fun horse to have around. He cost a few quid, so it’s nice that he can repay the team. It’s a difficult decision between those three for William (Buick), because there isn’t much in it and you could see that at the line. He had the penalty and he’s a classy horse, as is Mythical Magic. He’s an exciting horse, who I’m sure will improve fitness-wise. Things are going well so far. I have five winners on the board, so there are some nice horses to look forward to. We’ll take it as it comes.”

“I’m delighted, as he’s is a good horse and seven furlongs is his trip,” Appleby said. “He was a bit disappointing in his last start, but he has rock-solid form. The plan now is to perhaps go to Saudi for a race just short of seven furlongs, which seems perfect for him. With Mythical Magic, we’ll probably do the same and go to the Zabeel Mile with him and Mubtasim is undecided. We’ll just have to see how he comes out. There’s a race during the Craven meeting for him and possibly at the Carnival beforehand. They’re all three Group 2/Group 3 horses and showed that they’re that calibre today.”

The Listed $250,000 UAE 1000 Guineas sponsored by Mina Hamriya for 3-year-old fillies was the first classic of the season and went to Godolphin and Saeed bin Suroor, but not with favoured Final Song. It instead was powerfully won by Dubai Love, who appeared to love the extra ground this time around, as opposed to the 1400m of the Trial in which she was a gaining fourth. Pouncing on her rivals, she put distance between herself and runner-up Down on Da Bayou (Mickael Barzalona aboard), with Christophe Soumillon and the favourite back in third.

“Final Song is classy and has ran well, but not stayed,” Bin Suroor said. “Whereas Dubai Love, who ran well behind her in the Trial, has seen the trip out very well. The 1900m of the UAE Oaks should really suit her.”

Pat Cosgrave, who was aboard for the win, was full of praise afterward.

“I knew this filly would stay,” he said. “She has a mile and a quarter written all over her and I think she’s come on from her first run here. I was quietly confident and she ran a massive race. She beat (Final Song) and I was impressed with the way she ran in the straight. I said to Saeed that after her last run, she will be a staying filly for the Oaks.”

A conditions race for 3-year-olds, the $100,000 Al Bastakiya Trial sponsored by Hamdan bin Mohammed Cruises Terminal, was contested over the same 1900m on dirt as the big Super Saturday race itself. It was won in facile fashion by Laser Show, after which Bin Suroor had provided the winner of the three races in which he was involved. Settled in third by Kevin Stott, behind his stable companions Lost in Time and First View, the New Approach colt swooped past that pair at the top of the straight, immediately establishing a significant advantage that was never going to be bridged. Well-beaten in the 1600m UAE 2000 Guineas Trial, his local and dirt debut to weeks ago, this was a second career victory on just his fourth start, having landed a 1400m Sandown novice stakes on debut in July. The extra 300m and the fitting of a visor clearly benefitted him compared to his previous Meydan outing.

Bin Suroor said: “The visor has certainly made a difference; the last time he just took no interest in the race and was not concentrating. Obviously, he has stayed this trip well, but in the visor, we will probably have to try the 1600m again and go for the UAE 2000 Guineas.”

A 1000m turf handicap upgraded to Listed status this year, the $175,000 Dubai Dash sponsored by JAFZA, was turned into a procession by Equilateral, giving weight to all bar one of his seven rivals. Homebred by Prince Khaled Abdulla and a first UAE winner for Charlie Hills, the 5-year-old son of Equiano was gelded over the summer having shown decent form in good sprints in Europe, including four victories, highlighted by a Listed success at Doncaster last September. He was also a good second to champion Mabs Cross in the Group 3 Palace House Stakes at Newmarket last May. Confidently ridden by James Doyle, who actually tucked him back into traffic just after halfway so strongly was he travelling, before cruising up to early leader Caspian Prince and Waddy, who may have led briefly before Doyle’s mount swept past at the 200m pole after which the race was over as a contest.

“He arrived just before the New Year and has really taken to the place, the weather and the routine and when James sat on him for the first time at the weekend he was very impressed,” Hills said. “He has taken on a lot of the top sprinters in Europe and we think gelding him has really helped. He will probably come back here in four weeks and has options on Super Saturday, Dubai World Cup night and in Saudi Arabia, so we have plenty to consider.”

The evening began with the P & O Marina Handicap over 2410m on turf in which Harry Bentley-piloted Dubai Future ran like a horse with a serious future for Godolphin and Saeed bin Suroor. Stalking Zaman early, he flanked his foe until committing for home fully 500m from home. He shot clear and held Irish invader Massif Central comfortably at the line.

Bentley, partnering his first UAE winner of the season after 12 rides, said: “The pace was pretty genuine throughout and I knew my horse stays well and we had a lovely low weight, so I was keen to be positive. I was probably left in front a bit earlier than I planned, though the horse ran on well for me. I ride out for Saeed every day, so it is great to ride a winner for him, especially at the Carnival.”

The finale, the Jebel Ali Port, a handicap over the same 2000m on dirt as the $12 million Dubai World Cup sponsored by Emirates Airline (G1) was won in determined fashion by Satish Seemar-trained George Villiers. Reading the quick pace set early by American invader Parsimony early, jockey Tadhg O’Shea bided his time until unleashing a sustained rally that overtook Montsarrat, Great King and Parsimony, who finished astern him in that order.

The next DWC Carnival evening will take place one week from today on Thursday, Jan. 30 (6:30 p.m. post time), including the best dirt sprinters in Dubai in the Group 3 $200,000 Al Shindagha Sprint.