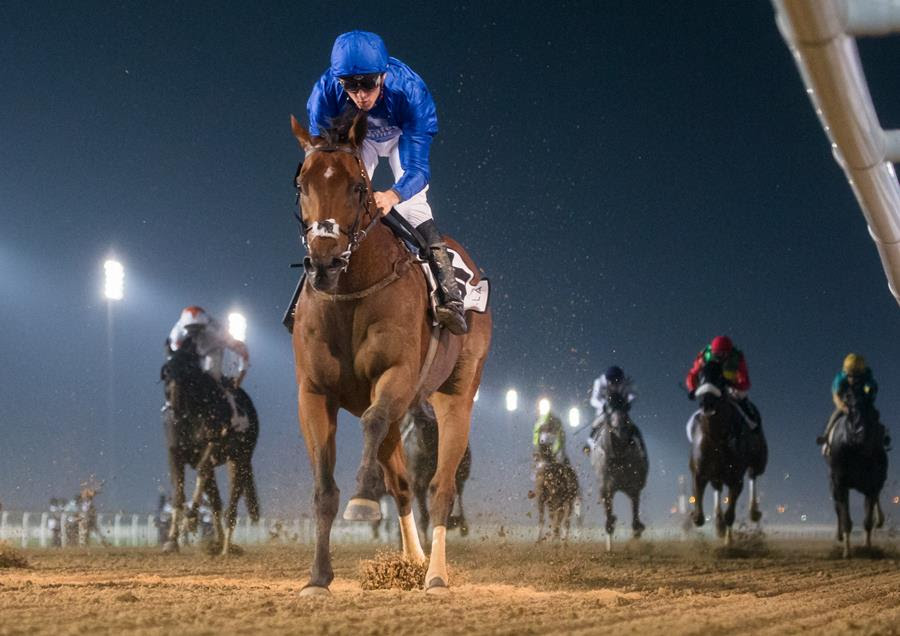 DUBAI (February 6, 2020)—Thursday’s sixth meeting of the 2020 Dubai World Cup Carnival at Meydan Racecourse, a seven-race $1.38 million card, was highlighted by the Al Maktoum Challenge R2 (G2), UAE 2000 Guineas (G3) and Dubai Sprint (Listed). Otherwise, a trio of handicaps and the conditioned Meydan Classic Trial gave us even deeper glimpses of the kind of star-power in store for the Dubai World Cup meeting in just over seven weeks.

The Group 2 $450,000 Round 2 over 1900m, a key prep for the 2000m $12 million Dubai World Cup sponsored by Emirates Airline (G1), showed a new dimension for Godolphin’s multiple Group 1 winner Benbatl, who won his dirt debut with style under Christophe Soumillon. Raced prominently in third, just behind the pace set by G1 winner Roman Rosso and upstart Chiefdom, he switched out around the turn, took over while three-wide turning for home and held off fellow Dubawi offspring Military Law by two facile lengths. Gronkowski finished third, another 6¾ lengths astern the runner-up. The final time was 1:56.80, just .13 off Frosted’s 2016 stakes record.

Trainer Saeed bin Suroor, who has twice won this with subsequent Dubai World Cup winners (Moon Ballad and Thunder Snow) was elated. The win was Benbatl’s 10th from 20 starts and added $270,000 to the 6-year-old’s bankroll to eclipse $5.7 million. A Group 1 winner on three continents, he will now point toward the big event in an attempt to give his connections a third consecutive triumph in tandem in the prestigious affair.

“He was the best horse in the field by far,” Soumillon said. “For sure, it was the first time on the dirt, but when the horses are really good, they can handle both surfaces. He has good gate speed, which is important for dirt racing. He was cruising the whole way. I was worried on the back straight, because he didn’t change legs properly—I had to force him twice to stay on his right leg. On the last turn, he stayed on his right leg for 200m, so I was little disappointed. Finally, he changed and when I came into the straight, I could feel straight away that he was able to run away and he did quite impressively.”

“It’s good to see him really travel well and win that easily,” Bin Suroor said. “To see the jockey, who rode Thunder Snow to win the last two Dubai World Cups, ride him with confidence and in the last three furlongs he’s still on the bridle shows his class. We have always known he’s a special horse on the turf, but Sheikh Mohammed wanted to run him on the dirt to see how he would run and it was a good decision from the boss. Sometimes you just have to give the horses a chance (on the dirt). Some can handle both surfaces. He handled it well and Christophe kept him handy in the race, which was the plan for him. He won it well, thank God. It was a good decision.”

The $250,000 UAE 2000 Guineas (G3) over 1600m on dirt was a classic worth remembering, as Reddam Racing’s Fore Left overcame post 14 of 16 to make all under William Buick and win in determined style by 1¾ lengths. The final time was 1:38.43 after setting strong fractions of 24.08 (no run-up) and 46.45 for the first 400m and 800m. Zabardast was a hard-charging third under Mickael Barzalona, while the Satish Seemar-trained pair of Emblem Storm and Lake Causeway completed the top four with one length between them.

“Doug O’Neill and his team were very confident that this horse had more speed than any other horse in this race, which he showed, but of course, I had to work hard and it took me a long time to eventually get across,” Buick said. “He set good fractions, got a little bit of a breather on the turn and then kicked again. He’s just a very game, honest horse who stuck on very well. He’s got a lot of speed and stayed the mile. I guess they’ll be pointing him to the (1900m $2.5 million) UAE Derby (G2) now, which is another furlong and a half, so we’ll see about that. It was a huge performance from the horse to get where he did, from where he did and in the manner he did. He got there within himself and put himself in a position after three furlongs to control the race, but it took a good horse to do it and that’s what he is.”

“That was so cool,” said O’Neill via phone while connecting flights in Texas. “I was absolutely going nuts and I’m so happy for Mr. Reddam and for my whole team. I am so proud to be part of a great team with Leandro (Mora, assistant) and Tony Romero and the entire team there and back home in California. What an awesome experience. With the post and the way the race was run with a little bend before the backstretch, he had to work a little extra-hard to get into position, so that was very impressive—but that’s why William is a top jockey. He did exactly what he had to do and didn’t overdo it. He got a little tired late, but probably had a lot to do with what I just mentioned and that he had two months off. This race will do him a world of good. After this, we will see how he comes out. If he’s diving into his feed tub, we may run him one more time (in the $350,000 Al Bastakiya on March 7), but if for any reason he shows fatigue, we’ll wait for the Derby. Dubai has made it so easy for us to relax and enjoy this and I’m a big believer that horses are a reflection of the people around them and this has been a great experience.”

Over the course and distance of the $2 million Al Quoz Sprint sponsored by Azizi Developments (G1), the $175,000 Dubai Sprint (Listed) provided a glimpse of the competitive local turf sprint division, with at least four in with a chance in the final furlong. In the end, it was HH Sheikh Hamdan bin Rashid Al Maktoum’s Rusumaat who proved the most willing in the end, pulling clear of American Blitzkrieg by one length, while favourites Roulston Scar and Ekhtiyaar rounded out the top four. The final time was a smart 1:09.81. Mussabeh Al Mheiri trains the winner, who gave jockey Dane O’Neill a double on the card.

“He ran well over 1000m last time and knew this extra 200m would suit him, but—to be honest—we probably did not expect to win and certainly not like that,” O’Neill said. “He is tough and genuine, which is always half the battle.”

The $100,000 Meydan Classic Trial over 1400m on turf was a rousing way to start the card, with undefeated Uruguayan filly Bella Fever overcoming a lacklustre start to close resolutely between horses in the final 400m under a masterfully patient ride by Dane O’Neill. Settled midpack until the turning for home, she switched out, split horses and outpaced market favourite Final Song, despite carrying 4kgs more than her Godolphin-owned rival.

The win was Mike de Kock’s first of the 2020 DWC Carnival and 141st of his storied Carnival career. Owned by J Stables and Victor Azambullo, the daughter of Texas Fever carried the same orange and blue silks of 2017 and 2018 Dubai Golden Shaheen (G1) winner Mind Your Biscuits to her neck victory in a swift 1:23.81. Godolphin’s Charlie Appleby-trained Story of Light was third and Reddam Racing’s American invader I Will Not was a good fourth for trainer Doug O’Neill.

“This filly is very exciting and we know she has a lot of ability,” De Kock said. “She has come through a lot, travelling from Uruguay to England, where she had surgery. As we saw tonight, she has temperament issues and we must thank Dane, who was brave on a filly he has done a lot of work with. We were not concerned about the weight concession because she is a big, strong and you could say alpha filly, but she is talented and she has really impressed me. We will have to see where we go now, because she is a winner on dirt, as well, so we have plenty to think about and look forward to.”

The evening’s second race, the $135,000 Yahsat Trophy Handicap, was contested over 1400m on turf, just like the opener. Finishing up just .29 seconds faster (1:23.52)—rather complimenting Bella Fever—it produced a blanket finish of three nations at the wire that was won by England’s Woven, a second 2020 DWC Carnival winner for trainer David Simcock. Godolphin’s Yattwee, the market favourite, was an unlucky second, failing to find room for his rally until late and out-gaming third-place Chiefofchiefs, also from the UK, and US-based Wildman Jack in fourth. A head, neck and half-length separated the top four at the wire in a thrilling contest. Woven, a 4-year-old gelding owned by Never Say Die Partnership, won for the second time in 13 starts and was ridden by Harry Bentley.

“The last few strides he was certainly tiring, but most of the race went perfectly,” Bentley said. “I was able to get a good position on the rail and when I needed the gaps, they opened. As you saw there he has a good turn of foot and quickened nicely for me. He is probably one of those horses who is better over slightly further than 1200m, but only just stays 1400m. Around the bend here at Meydan seems to help him.”

The 1800m $135,000 Strata Trophy Handicap provided turf horses a chance to run over the $6 million Dubai Turf sponsored by DP World (G1) distance and Godolphin’s Art du Val returned to the form that saw him impressively take last year’s Meydan Trophy over 1900m. While not as dominant as he was one year ago, he was still determined, holding off a flying Red Cactus of Denmark in second. The win gave Charlie Appleby his first of the day and William Buick his second. A nose separated the top two, while Epic Hero was another 1¼ lengths back in third. The final time was 1:48.77.

Buick said: “He is only a young horse who has not had much racing and you would like to think is improving all the time.”

The nightcap was the second division of the 1400m $135,000 turf handicap titled the Mubadala and was won in workmanlike (or work-woman-like) style by filly Beyond Reason, who bested the boys with a potent closing kick, holding off Laieth and Tashweeq under William Buick for Charlie Appleby. The win gave Buick a treble on the night.

“She ran very well last time in the Cape Verdi and didn’t quite get on. Tonight she travelled extremely well. She’s a filly with a lot of speed and could possibly drop back to six furlongs if she wanted to. She’s a good filly who’s very game.”